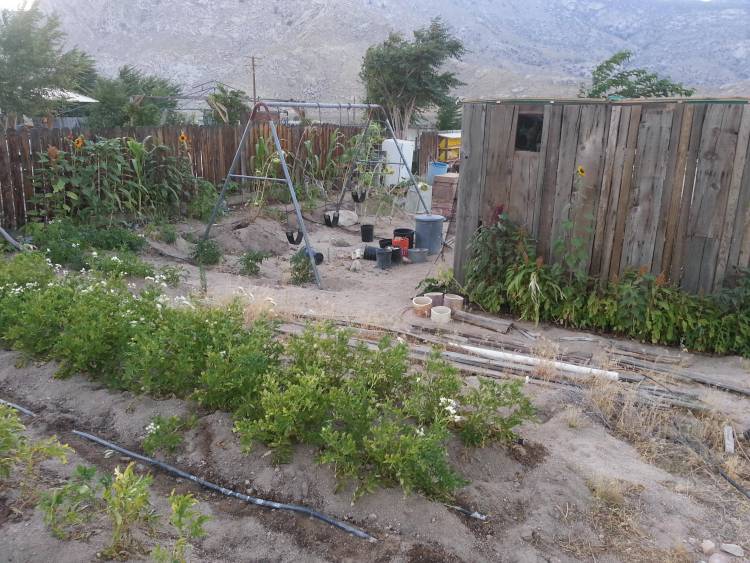 Potatoes behind the Whinery in 2016, I thought they did well at a few lbs per row foot. Have always though growing potatoes in the garden weren’t worth the effort because of how cheap they are in the store but like anything else from your own garden its so much better than anything you can buy. There is a secondary benefit to the rotation of potatoes through the garden. Every 3 or 4 years as you get back around to a patch of ground the trench and hill planting and growing of potatoes gives the soil a bit of a mix. Potato crops rotating through are the most extensive tilling we do.

Grapes starting to grow up on the whinery and lots of flowers. If you look close on the right side you can see some tomatillos. Seems the tomatillo attract the Colorado Potato Beetle a disgusting creature that not only terrorizes your plants but also carries its excrement around on its back so they are off the pinch and pop em list of pest control. They can be scraped off into a cup or something and disposed of or sprayed off with a hose, either method take diligence but we had the most amazing tomatillos so it was worth it in the end. The tomatillos is one of the plants that is naturalizing here coming back in different parts of the garden year to year from seed. This naturalizing is something we encourage to outseed the undesirable weeds with weeds we want. A bit of permaculture gardening if you will, in fact due to my wrecking my knee our 2017 garden in large part was volunteer and was still quite impressive.

This Red Amaranth sure liked growing here, so much so that it chose the spot growing as a volunteer and grow it did. The mass this plant put on was impressive. Amaranth loves the summer heat and produces those showy plumes all through it. The plumes contain probably millions of tiny seeds that can be used as a grain in a pinch. The chickens love every part of this plant leaving nothing but the trunk behind.

Last picture was our okra patch for that year, this location is also where our okra for 2018 is growing. They did very well there. When growing okra we trim up the leaves as they grow to just below the last fruit cut. Aphids seem to be attracted to it and the ants will farm them. Blasting the undersides of the leaves with a hard spray of water to wash them off worked well to control them. We keep hoping the aphid eating insects will eventually outnumber the aphids but of course that’s unreasonable as they will only grow in population to what the available food will support so its always a balancing act combined with a little help from us.

We use no pesticides even organic ones in most of our gardens because of the non specific nature of them, they will kill the good bugs along with the bad ones so you end up caught in a circle of find a problem, fix a problem, create a new problem. For most things it just takes a little time and the more biologically active the system is the faster those corrections will be made.