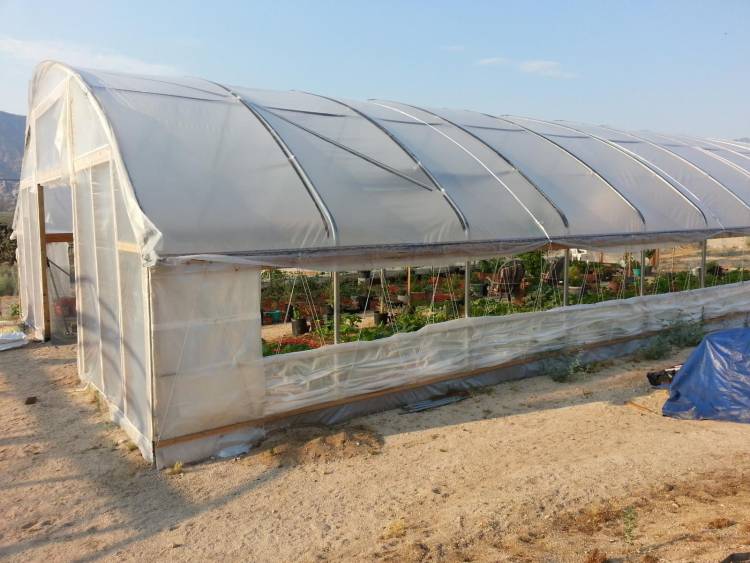 My apologies as I don’t have pictures of installing the sidewalls and installing the top plastic film. The instructions that came with the kit were very clear and easy to follow though. I was quite busy through this time and rushing to get the first one covered. I still have the second one to finish so I plan to try and document that to add to these articles.

After getting the sidewall curtains on we caught a still morning before Sherry had to go to work and were able to pull the film over the top. We used mule tape fastened to it in 3 places and the two of us were able to pull it over then get the wiggle wire in the track in a couple of hours.

That afternoon on October 28th 2016 while finishing up the plastic on the final endwall I took a spill off the ladder and really finished off a knee I had been injuring most of my life. There were complete tears in all of the ligaments so severe that the specialist had to send me to a specialist. After 3 months of waiting for healing and swelling to reduce on Friday the 13th January 2017 I went in for a 4 1/2 hour surgery and had the ligaments on both sides of the right knee replaced. It was another 3 months before I was allowed to begin putting weight on my leg and has been a long road since in regaining mobility.

I mention this to let local folks who know these greenhouses know why the sidewalls blew in the wind after coming loose most of that first winter and why we have been slow in finishing them. Also right around the time I had my fall we got a letter from the county telling us our greenhouses had to be engineered and permitted or they would tear them down and bill me for it. We recently after paying about $4,000 for engineering and $1,000 for permits have finished all of that mess up which has been a great relief and given a feeling that these finally belong to us.

Just a short note here on these structures, the universal Building Code that most areas in the US use has an exemption for shade structures for agricultural purposes. Everyone I have spoken to tells me nearly every other location recognizes these as such, when pressed as to just what would fit that description I was told nothing does, if its over 120 sq ft it has to be permitted and to get a permit it has to be engineered if not built with standard building materials they understand for loads and spans.

On to the pictures

Its difficult to get these in a picture because if you get the whole thing you are too far away for the details, they really are that big. I realize there are much larger around but for us in our garden these just seem incredibly huge.

These two shots are different years of the planter along the north side, that huge red and green thing in the second picture is a swiss chard that is 5 feet tall and growing. We harvested off that plant all winter long as we love it chopped in scrambled eggs and in soups.

I call this my 60’ wide screen, nothing like sitting out here in the evening. I have watched a covey of quail grow up while taking their path to roost each evening, hawks protecting their claimed area and bunnies go by wishing there wasn’t a rabbit eating dog behind the fence.

This picture also shows a bit of the bed layout. The bows are on 6’ spacing and the beds are centered under them and are 3’ wide x 12’ long. The paths between are also 3’ wide.

There is a 6’ wide path down through the center of the beds with 9 beds on each side for a total of 18 beds. I intend to dig out the center path a foot deep and put concrete retaining walls along each side then cover it with redwood deck built into 2’ sections so they can easily be lifted out. The will be our worm beds about 5 feet wide and 60 feet long, each of these will hold over 10 cu yds of horse manure that will in turn become worm bedding and circulated out to the garden.