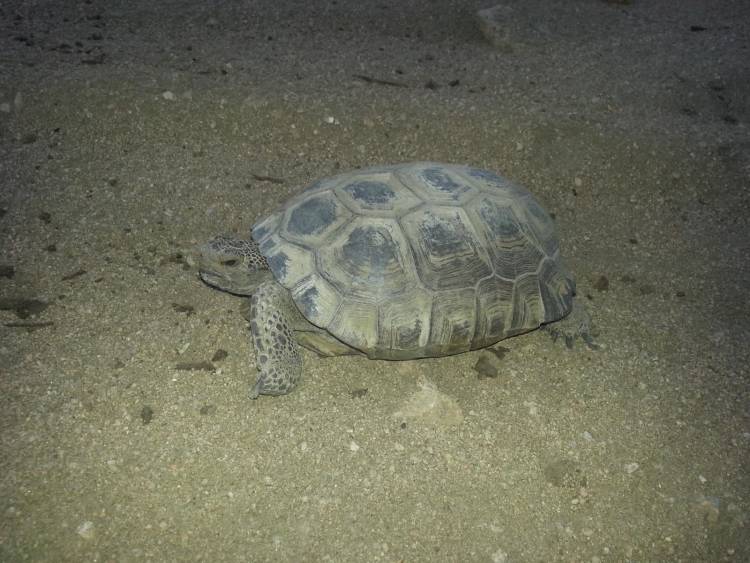 This was the second time I had seen a tortoise in close to 25 years of being here and it was within a month of the other sighting. I don’t know if it was the same one, if it was he did some travelling as the other glimpse was around the back side which is fenced. My guess is from its size at least 40 or 50 years old, he has certainly been here a lot longer than we have and maybe even longer than I am guessing. In drifting thoughts I can imagine him recalling the good old days when cars only went 30mph and were few and far between.

I have seen horned toads here, not many but more often than desert tortoises. 2016 was a banner year for sightings though, the wildlife is growing with the garden. I saw mating adults and 4 or 5 of these babies over a few months. This little guy was so tiny its tough not to think he is adorable.

One of many squirrels that have been rehomed. Squirrels and rabbits account for the biggest part of damage to what we grow. Its frustrating when all of your new sprouts get clipped or there is bites out of every fruit on a vine. The next picture is probably our best defense, Nukka is demon on squirrels and rabbits but even she cant be there 24/7.

Charlie is the bear chaser, he has literally chased a bear out of the yard. Well he followed it barking as it walked out of the yard but that’s not how he tells the story. He isn’t much good for pest control and likes the scare the chickens but Sherry loves him so I cant drop him off on a squirrel run.

Lastly Bashful the garden cat, she likes to follow Sherry around complaining about the heat and trying to convince her they would both be much more comfortable sitting in her chair watching tv. Right behind her are some sugar baby watermelon. We tried some chicken wire covering and it helped protect the vines but was a pain as the plants grew through it. Rabbits will go down a watermelon vine chopping it into 3” long pieces leaving the remnants scattered almost as if taunting us with threats of total destruction.