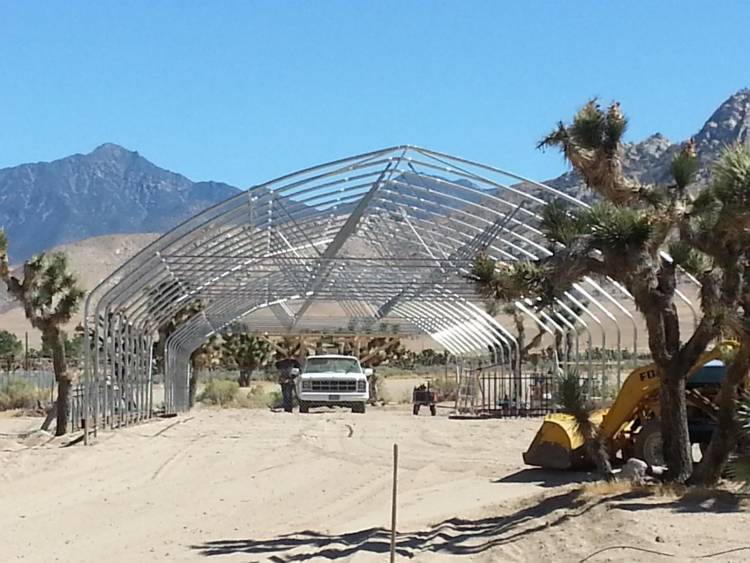 First things first, make sure its safe before I climb up there, bring in the safety inspector. Sherry climbed up to give it a go. There is a lot of lumber in this scaffolding but it gave me a huge work area with a floor just about 6” under the cross members of the truss. The legs on the sides are just shoved in and pulled for each move then shoved back in. They did a great job of keeping the truck from rocking as I moved from one end to the other. I used the 12’ 2x8s purchased for the sidewall headers for the platform.

A spacer made sure each bow was spaced proper as the ridge purlin was fastened in to place. The two lower purlins are outside of the of the W of the truss. Along with these purlins there is also a large V at each end that starts on the third bow in at the ridge and ends low on the end Bow. Zimmerman’s created a very strong design here.

Fastening the purlin into place. All of the screws, clamps and brackets were included in the kit. The scaffold allowed me to reach 2 bows at a time between truck moves. Rick came down while I was doing some of these and moved the truck for me.

A whole lot of steel, if you look close you make out the purlins in all of that. Everything above the vertical sidewall poles is 14 gauge which is pretty heavy and the sidewall poles themselves are even beefier at 13 gauge. This will last a few lifetimes so with just a little care will likely be not only a joy to garden in for the rest of my life but also someone else’s. From the first bow in the picture to the last bow it is 144’.