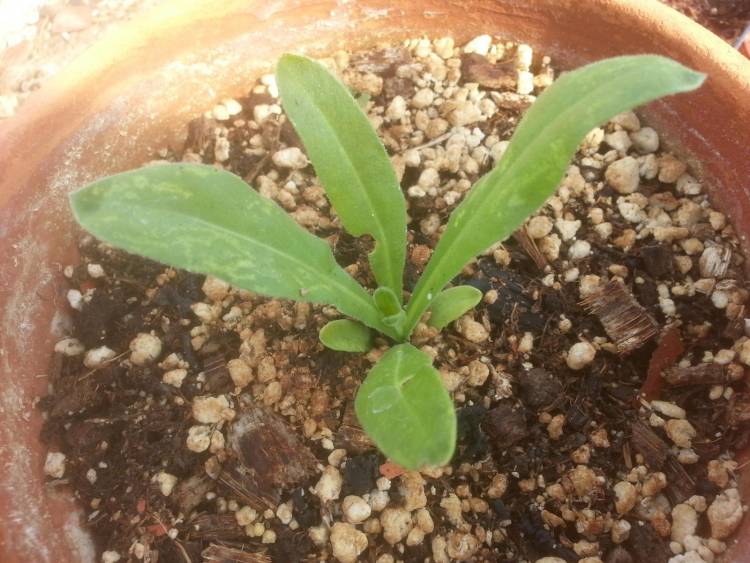 The image above is a Calendula, just on their second year in the garden but this versatile plant wintered over in the greenhouse and is beginning to secures its place. They make copious amounts of blooms all summer long and begin to produce them early in the season so a great plant to have for letting the bees know you are still in business to make sure they show up for work when the vegetable plants need them. Heading back the spent Calendula blooms through the year promotes growth and more blooms and yields seed heads full of what the chickens deem to be a right proper treat. When heading them back the seeds are full and plump yet still green and tender which would make me think they are packed with vitamins and nutrients yet still easily digestible. In any case they never last long in their compost bins.

This property is probably not really high desert considering some of the real high desert areas at twice our elevation but at 3100 feet above sea level it is distinct from lower deserts. We get around 12” average annual rainfall with some of that coming in the form of snow most years. Normal would be a couple of 2 to 6” snow accumulations, one year we had close to 24” from a single storm though I believe that to have been one of those 100 year event type snowfalls.

About the title of this article, I was split on what to name it because both seemed fitting so the option was left for the reader to choose whichever they liked better.

Volunteering for Service because all of these plants grew here on their own accord, many have been potted to either grow out in a pot or be moved into a location in the garden once they grow up a bit. These volunteers have filled the garden since the year following our starting because we leave select plants in the garden to go to seed, the attempt is made to allow the best performing specimens to freely seed and often seed will be collected and spread by hand. Attempt because so often many plants will spread seed before they are headed back and the birds will do collecting of their own of the seeds cast about.

Take that to the Bank is our philosophy of changing our seed bank. By presenting the soil with a variety of seeds from plants we want to grow and eliminating as much as possible those we dont want our favored plants will eventually out compete the native undesirable weeds. The end goal is to have a wide variety of self seeding or root running plants that replace most of the unwanted weeds. By continuing to pull the weeds we dont want and letting those we do want to reproduce this is happening remarkably fast. All of these efforts began to offset the feed costs on our chickens, we have kept for the last few years between 60 and 80 chickens. The Garden exists for and in large part because of the chickens, much of what we grow goes to them and of course what they produce goes to the garden. I am not completely sure which came first but they tightly entwined with each other leaving me in the middle as their donkey that carries what they share with each other back and forth. As sad as an existence as this may sound it has been terribly exciting to be a part of marveling in the progress both are making as the years pass. I would be remiss here if I didnt also note that the rewards have been exceptional, I may be a donkey but I am a very well fed and content donkey.

Obviously the Asparagus above doesn’t go to the the chickens as the fern bits are toxic to them and there are many other plants that are either toxic or otherwise inappropriate as feed for them. These Amaranth below though are a far different story, we try to select most of our plants on a chicken friendly basis especially those that are for the bees such as the flowers but when it comes to vegetables and herbs there are some that we want for ourselves too such as tomatoes and other nightshades whose fruit is fine for them but not the plant itself. This is a big part of why this site is here, it will serve as a reference as years go by for us and make sure we send garden refuse the right direction either to the compost heap or the chickens compost bins so everything finds its way back into the system and all of the inhabitants stay healthy and happy.

Amaranth seed is a grain that can be made into high protein gluten free flour. We would need to do some research and build some processing equipment to actually make any Amaranth Flour but it’s nice to know it is available and grows so well here. The seeds are impossibly tiny when compared to the tree trunk producing hulk of a plant that comes from them. We have had these grow to 6 feet tall and more on gnarled trunks 3 inches across, amazing that an annual can be so productive in its short life.

Amaranth loves the dog days of summer presenting its showy blooms when much of the garden is just trying to hang on. The huge colorful plumes make for striking views in the garden. They are havens for all manner of tiny spiders and other insects and loved by the chickens either as small volunteers that have been thinned or removed from where they don’t belong or even more so once grown because of all the tiny seeds and insects and massive biomass of leaves once they have had those several months to grow and grace the garden with those impressive displays. The amount of feed these plants provide with little care and such sure return each year has proven them as a valuable resource in a system such as what we have put together and this is without exploring the possibility of using them for flour, should we learn how to make bread from them they will likely make the short list of most favored status.

Even the weeds get their fair shake here if they are deemed useful. Mallow, Purselane and Plantain are some of them and then there is also a host of flowers that are always welcome in a garden. It’s a true journey to learn more about the native life and of course culture those that bring their own rewards. Again our focus is always towards creating a space filled with plants, animals, microbes and insects that will in turn provide in some way for us. This could be in medicinal (teas, salves, or supplements), aromatic or colorful for our own enjoyment, supportive of beneficial insects and of course attract the hardest workers in the garden the Honey and Bumble bees. From there we go further for our own food, food that is unblemished by chemical fertilizers and pesticides, food that is packed with nutrients even if maybe not the picture perfect representation one thinks when looking on a supermarket shelf but full of flavor and texture also most often unlike commercially grown.

The seed bank is about creating our own weeds, when we have to do that always dreaded chore of pulling those weeds it at least holds some self-satisfaction that it’s not going to waste so the effort become more like the wonder of harvest than drudgery of weeding. Sometimes small greens are consumed on the spot to keep the weeder fueled, those that the chickens can have go to them and there rest goes to compost so the organic material they have built from the soil can return to do its work again.

Our seed bank is an ever evolving and growing resource, through selection and acclimation many plants are adapting and performing better each year. They also have the chance to find the place in the garden they like best bringing us along by following their lead furthering our education. We had a Swiss Chard grow all through the winter last year and were able to enjoy a few leaves of fresh goodness from the garden chopped up in our morning eggs or added to a soup. That plant is now in its second year and shooting seed stalks up 5 feet high creating literally tens if not hundreds of thousands of new opportunities for this plant to continue here on our property.

I will finish this up with some of the other Volunteers that have shown up this year, this is by no means all of them as some haven’t even shown yet and some I am sure I just haven’t found. Many of these pictures will go into an article the will be more of a catalog at some later date to be used as a refresher in identifying plants while “weeding” in the years to come.